In late 2013 I started thinking about switching to an ergonomic keyboard. I did not have wrist pain or other health issues – although preventing them is a good reason as well, I mainly wanted to improve my productivity.

The key layouts on typical keyboards are vastly suboptimal: the alphanumeric keys are staggered (a carryover from mechanical typewriters), and important keys (modifiers, Backspace, Return, arrow keys) are too hard to reach. Although this is often worked around in software (e.g. hjkl movement keys in vi, Colemak remapping Caps Lock as Backspace), it is much more effective to fix the keyboard instead.

I was looking at three options:

I ruled out TypeMatrix due to keylock (I think lack of NKRO is not acceptable for a high-end keyboard), and the Kinesis struck me as overly bulky – I wanted something I could take with my laptop (the TECK’s hand rest is removable). 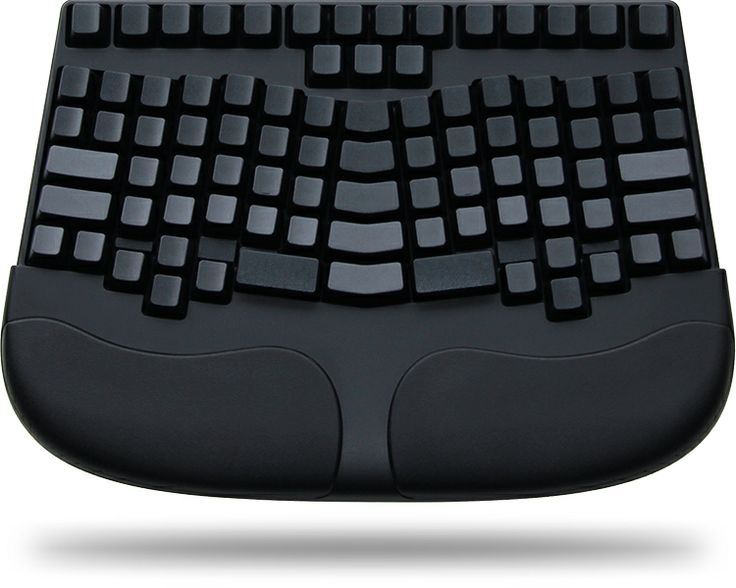 Adjusting to the keyboard was difficult for me, because I was not really touch-typing properly before. My right hand’s home position had been shifted by one key to the right, so I could reach Enter and Backspace easier. This wasn’t intentional, but rather just what my typing gravitated towards. As this typing stance does not carry over to the Truly Ergonomic, I had to re-learn to touch type with my right hand. This wasn’t a problem in itself: I set aside a few days and a copy of The Typing of the Dead to get adjusted.

However, I got my old speed back in an hour (much to my relief), and I started noticing how much more work my right hand was doing, so I changed my mind and went back on the TECK. In retrospect, this has happened to me once before: ten years ago, when I tried using QWERTY after a few weeks of learning Dvorak, during which I was using it exclusively. The recent Backwards Brain Bicycle video from Smarter Every Day describes a similar effect, I think.

Truly Ergonomic provide a 60-day money-back guarantee, but you first have to use the keyboard for at least 30 days. As I found out, this has a good reason: I definitely went through a “this sucks and isn’t working for me” valley, after which my productivity began to go back up and I started liking the keyboard. So far, I do not regret my decision to keep using it: my typing speed is higher than before, and having all keys within reach without moving your hands is… quite fantastic.

The keyboard is reprogrammable. To reprogram the keyboard, you use an interactive tool on their website in which you can assign keys with drag-and-drop, or by directly typing the desired action onto the keys. When done, you can save your layout as a bookmarkable link, and download a binary firmware blob which can be flashed onto the keyboard using a separate flashing tool.

Some of the customizations I made: 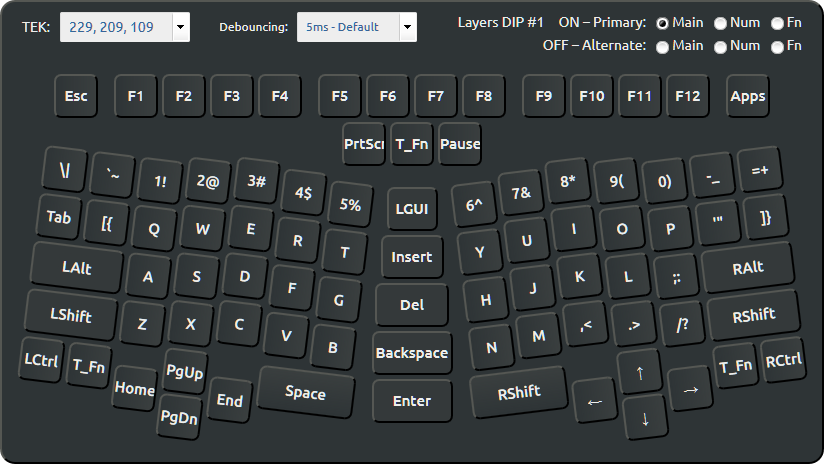 I won’t list the price as a downside. The TECK is expensive, as all ergonomic keyboards, but if you make a living pressing buttons, the investment pays itself off very quickly.

Would I recommend buying a TECK today?

There are some interesting new ergonomic keyboard projects:

I would suggest looking at those first, mainly because these all have thumb key blocks and the TECK doesn’t. Otherwise, if you don’t want to wait for the keyboard.io or KeyMouse, don’t want to build your own Ergodox, and found no other interesting keyboards, I would say that the TECK is a solid choice.